How to fix a crappy dryer…

A year ago, almost to the date, we bought an inexpensive clothes dryer. About a week ago we began to hear some noise. Of course we could not find the receipt and given that we live in Spain, where you must pay for everything, we decided to find out what the problem was.

After much digging we found the service manual. With it on hand, we began the task of taking the dryer apart. Taking it apart is actually pretty easy, we just followed the directions.

Once apart we found out the issue. The problem was the drive belt idle pulley. It turns out it’s made out of plastic with a metal bushing for support. I cannot imagine a more important piece in the dryer where a bearing was needed, but I assume Haier knew this and still used that part to cut costs.

OK, no big deal. We took the motor off and removed the pulley and off to the parts store we went. That’s where the story became a joke. It turns out Haier only sells the pulley as part of the entire motor assembly. Yes, you read this right. They were asking us to pay €115 for the pulley (and they’d include a free motor).

I did a lot of digging and I came short every time. As far as the “internet” was concerned, there was no such thing as a simple pulley replacement (at least none that I could find).

Our solution was super simple, replace the crappy bushing with two needle bearings. The bearings specs are:

To press out the bearing we used a small vise 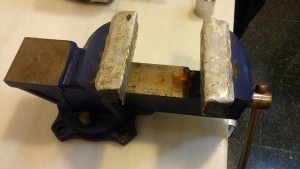 In order to press the bushing out we used a large socket to act as a holder of the pulley, and a small socket to push the bushing through like this: 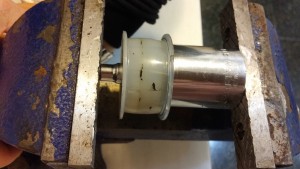 Slowly, we compressed the vise and out the bushing came. 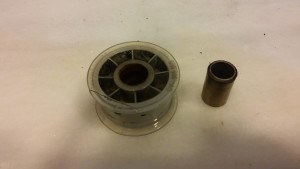 With the bushing out we cleaned out the bore of the pulley and used a little bit of locktite. You don’t need the vise to press in the bearings because the pulley is plastic and it’s very easy to do by hand.

That’s it. The total cost to fix this was €18 for the two bearings.

I am super disappointed in Haier. I paid €18 retail for the bearings. I am certain with their buying power, it would have cost them less than €3. I would have happily paid an extra €10 to have bearings in such a stressed part.